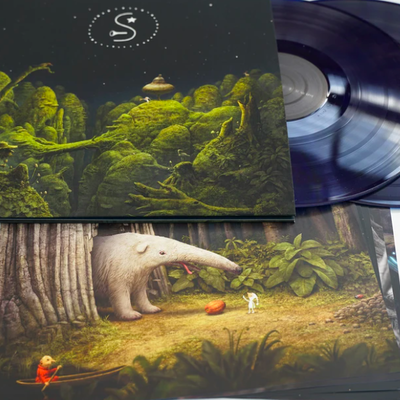 Czech developer Amanita Design's third installment in the Samorost point-and-click adventure series is available for smartphones, as well as Windows and Mac operating systems. The music score is composed by Tomáš Dvořák (Floex) of Machinarium.

Pressed to 180-gram audiophile vinyl, the two-disc blue marble vinyl soundtrack reprint by Minority Records, based in Prague, is currently available through the publisher, the Amanita Design store, and European distributor Black Screen Records of Cologne.

Performers on the score include cellist Tomáš Jamník, vocalists Bára Kratochvílová and Miloš Dvořáček, and sound designer Matouš Godík. Art for the vinyl release is by Adolf Lachman and Jakub Dvorský.

Prior to the release of the game, Floex posted a pre-release EP of remixes featuring Olaf Stuut, Julien Mier, Zka4t and Tom Hodge. Excerpts from the album are available through SoundCloud and Bandcamp. A behind-the-scenes video from Amanita Design is streaming on YouTube.

One day, the little space gnome finds a strange magical flute that fell down from the sky, and with its help he is able to build a new spaceship, explore five different planets and four moons, solve many mysteries, and also find out where the flute is coming from.

Samorost 3 2LP by @FloexOfficial got a new reissue!

This translucent blue double vinyl comes in a gatefold cover with velvet lamination, so you don't need to worry about nasty fingerprints 😌