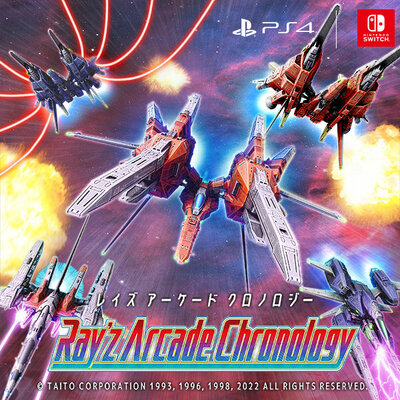 Back in April, City Connection published Layer Section & Galactic Attack S-Tribute, centering on the home console port of RayForce, released as "Galactic Attack" on the Sega Saturn in the West. Music from the Rayforce trilogy, composed by Kawamoto, is available for streaming on Spotify.

Taito's Rayforce series compilation Ray’z Arcade Chronology is slated for release on March 9th in Japan. The shoot-em-up retrospective developed by M2 for PlayStation 4 and Nintendo Switch bundles Rayforce, RayStorm and RayCrisis, along with HD remasters of the latter two titles.

Domestic preorders have opened at at distributor Play-Asia for Ray’z Arcade Chronology: Special Limited Edition for Nintendo Switch and PlayStation 4. Preorders for the localized edition have opened at Strictly Limited.

Ray’z Arcade Chronology includes three titles: RayForce, RayStorm and RayCrisis. The latter two 3D titles include enhanced HD versions. Rediscover the trilogy with 5 Versions of 3 titles in a box full of collectibles and limited-edition items and relive the excitement of epic battles from outer space to cyber space.

One of Taito’s classic SHMUPS, the Ray Series’ outstanding feature has always been its lock-on mechanics and attack layer system. The former allows the player to target multiple enemies at once and destroy them with one deadly homing attack, while the latter features enemies on the same plane as the player as well as the one below them, necessitating a keen eye and quick reflexes to not be caught out. All three were pushing the boundaries of graphic fidelity at the time of their respective releases and still are a feast for the eyes today.

One of the most iconic vertical shoot ‘em ups from the 90s which was created by TAITO is coming back with new features and in HD quality on Nintendo Switch and PS4!