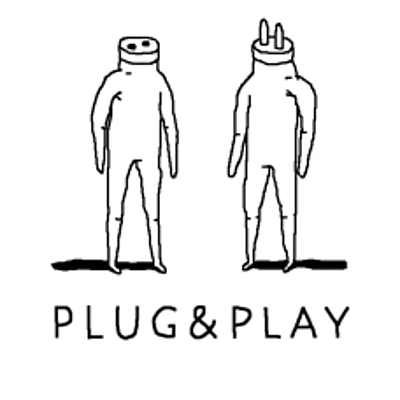 Etter Studio's Plug & Play by Swiss designer Mario von Rickenbach is a collaboration with animated film director Michael Frei, exploring the theme of the desire for connectedness through the medium of touchscreen devices.

In this Q&A, we are offered details on the making of the game and thoughts on the forthcoming collaboration with jazz composer Andi Bissig on atmospheric exploration title Mirage, a featured title at the Tokyo Game Show's annual Sense of Wonder Night event.

Plug & Play is a conceptually challenging game, and it can be completed in one sitting. How do these choices as a designer affect your pricing the game appropriately?

Mario von Rickenbach: We wanted there to be a barrier to buying it if you don’t really want it. At three dollars, most people at least have a quick look at the description, and maybe they say, "No, I will not buy a game for three dollars when I can complete it in ten to fifteen minutes." Then, okay, it’s not for you, probably.

That would be an argument for a developer putting an unconventional kind of game of theirs on the iTunes Store for three dollars, not one dollar?

Yeah. At three dollars, there's more likely a pause. You think more and read the description. You know what you’re getting into.

And, of course, if you had given away the game for free then you're not going to recover your costs, because you and Michael Frei have invested months on the project, working at your studio in Geneva?

From the time we met, then making the prototype and until the release, it was pretty much two years. We had to transform these non-interactive animations and make them accessible, which was interesting but it took a lot of time. I've never used the technique of cutting between scenes in this way, so that was also new to me.

Making the interactions accessible seems like it would be very important, because the abstract themes of the game are themselves a challenge to grapple with. How have you found testing Plug & Play with different kinds of audiences?

Michael’s grandmother played it on a laptop with a trackpad, and she finished it, even though she had never used a trackpad before in her life. In a sense the content is not completely obvious, but we did think the interactions should be playable by anyone. "Plug and Play" as a term means you just plug it in and it works.

There's a certain advantage to having a game of this length, in that you can have the entire experience on a train ride to work, in one sitting, and be left with something to think about. You're not breaking up the narrative into two, five, ten sittings?

When I showed the game to my brother, who's not a guy who plays a lot of games, he sat down and played it until it was finished, and he really enjoyed it. But still, I think he was happy that he didn't have to invest more time into it to get the full experience. And this is also the kind of game I tend to play. I almost never play a game that takes more than an hour to finish. It's maybe comparable to the formats of short films or written short stories, which I both really like, because the time investment is very small compared to the value you get.

A short format like this also allows the creators to take more risks to try out things they couldn't do in a longer piece, and at the same time the audience will try more risky content because they know that if they don't like it, they will only lose a little of their precious time, not hours.


In terms of symbolism, on the website there's some commentary about how the etymological root of the word "digital" relates to fingers, which is interesting in the context of a touch-based tablet game. Digital media is encoded as "ones and zeros," or "on and off" positions, and here you have a game about polar opposites?

That’s not the only connection. Michael drew all the animation with his finger on the trackpad of his laptop. In the game, we tried to play with all these opposites – there’s black and white, there are two plugs, male and female. This helped to make the world, in some way, consistent.

In one scene a plug says, "I love you. Do you love me?" Was this interaction included in order to make it easier to identify with these non-human characters, since most of their behavior is far more mechanistic?

I think most people are surprised that these characters can talk. It's not exactly expected. At this point, people start asking if there is more to what happened before, and start to invent their own interpretations.

There's a simplicity to the presentation in Plug & Play, in that it's in black and white. But there must have been many technical hurdles to overcome during the process of development. In one scene you lift a plug and its cable is trailing behind it, bending over a box. Does that kind of detail take a lot of trial and error to implement, so that the animation looks seamless?

A lot of the physical objects, like the cables and the interactive puppets, we started developing after we finished a small side project called "Finger Simulator." This game is an even shorter format toy that we developed as a promo for the Fantoche animation festival in Switzerland, where we figured out how to make these black and white line drawings more interactive using simulated physics. We started using the same approach for Plug & Play.

It’s always a lot of work to tune the physics, to make it really feel right. I restarted work on that cable a few times, and in the end I went back to one of the first techniques that I had tried because it turned out to be most flexible. Maybe you have to do something three times. Then maybe you choose the first one, even though it requires you to throw away your work, which is quite hard.

That's one moment where it struck me as being not necessarily evident just how challenging it would be to implement properly.

Yeah, it’s not obvious. We had Michael's film as a visual template and needed to reinterpret the existing visuals for an interactive format by adding the right motion and interactivity.

Andi Bissig performed music with you at a live concert during the Game Developers Conference, and is now composing the music score for Mirage. How would you describe collaborating with artists on games like Plug & Play and Mirage?

I think it’s very good to have somebody who you can talk to—somebody who is thinking about the same thing in a different way is useful, as long as you can discuss things together. It was very valuable on Plug & Play to have two people from different fields giving their inputs on the game.

During your Sense of Wonder Night presentation in Tokyo, you mentioned that you had created a green screen in your studio to photo capture the mouth animations for Mirage. While the audience was amused by the sight of your home office transformed into a makeshift movie studio, what I think you demonstrated was that an independent developer can get good results through persistence, and trial and error?

I had started with 3D models, just to use as placeholders, and I really didn’t like how it looked. It was really ugly. Then I thought, okay, to do realistic 3D models where every little detail is exactly right would be practically impossible. For me, even in the newest, high-end 3D games, the characters still don’t look right, and I'm certainly unable to achieve that kind of quality anyway. So I started to think about how I could recreate a lifelike impression with another approach. It seemed that with this pretty simple technique of just taking videos, you get a lot of life out of an eye, or a mouth.

For Mirage, I'm trying to use the most suitable techniques for each part of the world: Low poly geometry for the scenery, cutout videos for the character and lots of procedurally generated geometry for dynamic pieces like the body connections, the water and so on.

At times I observe that even very informed people have narrow views about what games are or can be. How did you feel, for instance, after your presentation at Sense of Wonder when a judge advised you that the current build would benefit from introducing enemies?

I think to add enemies to a game like Mirage is completely misplaced. It just shows that somebody really doesn't understand what it is about. I'm still not sure if this was a joke when he said it – I hope in this case it was – but I've heard the same thing from other people.

In the end, this is just lazy, and also a little sad. A lot of people want again exactly what they already know, maybe with a new name. But there are so many possibilities of what could be done in games.