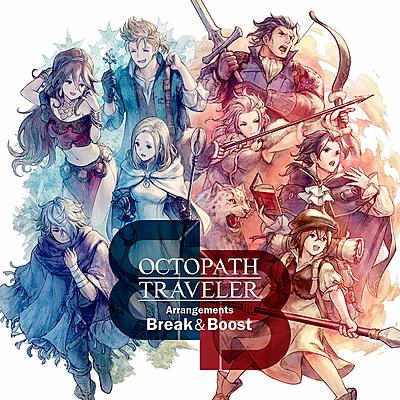 "Break & Boost" covers are split evenly between the piano renditions of the "Break side," performed by pianist Yuya Mori, and the band arrangements of the "Boost side." Source material for the album include Nishiki's compositions "Octopath Traveler Main Theme," "The Frostlands," "Determination" and "A Settlement in the Red Bluffs."

"Break & Boost" and spiritual successor "Extend" ship separately on compact disc from the Square Enix online store in North America. Octopath Traveler is available for Windows through Steam, Nintendo Switch, and Xbox One.

Eight travelers. Eight adventures. Eight roles to play. Embark on an epic journey across the vast and wondrous world of Orsterra and discover the captivating stories of each of the eight travelers. Play as eight different characters, each with their own stories to uncover and side quests to complete...

A wondrous, charming, most excellent...rock out performance 🎸

The hit 2019 concert, OCTOPATH TRAVELER Break, Boost and Beyond Live, is now available as a digital album: https://t.co/GddhVQYuKt pic.twitter.com/uHgpniSgRX