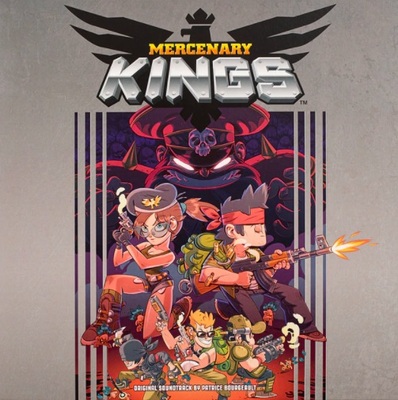 Publisher The Yetee has pressed Tribute Games' Mercenary Kings soundtrack on tropical sunburst vinyl, featuring music composed by Patrice Bourgeault. Cover art for the album is by Stéphane Boutin, with design and packaging by Marc Junker and Drew Wise.

The platformer's digital soundtrack can be purchased through Bandcamp and is streaming on Spotify. Mercenary Kings is available for Windows, Mac and Linux through Steam, along with PlayStation 4, Nintendo Switch and Xbox One consoles.

In this frantic 2D action game, you are part of the Mercenary Kings, the most skilled team of warriors-for-hire on Earth, but when your comrades have fallen and the fearsome forces of CLAW have seized an island-wide top secret Laboratory Base, you must do what it takes to stop them. But you're not going in unprepared! Your back-up is made of a crew of rogue geniuses and experts of their field! Able to craft & customize guns'n'blades or upgrading body armor, you've never been this ready to join the fight.

We're celebrating the newest @TributeGames drop from @YeteeRecords with a Mercenary Kings Vinyl Launch Stream! 👑 We've even got special guest @Pat_Bourgeault joining us to chat about the vinyl and the music of Tribute Games!