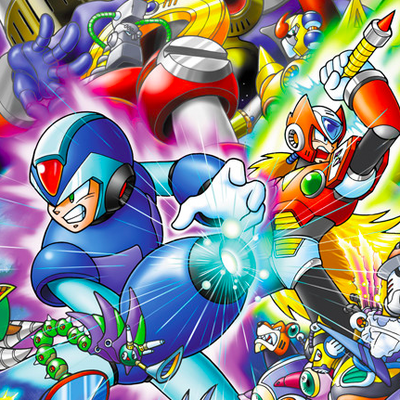 Mega Man X3 was the first installment in the series for the Sega Saturn and Sony PlayStation consoles, and allows the player to control either X or Zero. They face off against rogue Reploids Blizzard Buffalo, Toxic Seahorse, Volt Catfish, Crush Crawfish, Neon Tiger, Gravity Beetle, Blast Hornet and Tunnel Rhino.

Music for the game is by Castlevania composer Kinuyo Yamashita. A piano arrangement of the "Blizzard Buffalo Stage" theme performed by the composer can be viewed on her YouTube channel. The "Mega Man X 1-8: The Collection," a limited edition eight-disc vinyl box set, ships from publisher Laced Records in London.

Mega Man X3 is available for Wii U and Nintendo 3DS, and included in the Mega Man X Legacy Collection compilation for Nintendo Switch, PlayStation 4, Xbox One and Steam.

After discovering a virus that is turning intelligent and peaceful robots known as Reploids into rogue Mavericks, the scientist Dr. Doppler successfully creates an antivirus to the phenomenon. The reformed Reploids then move into Dopple Town, a place where humans and Reploids can live together in harmony. But when an outbreak occurs causing the Reploids to turn back into Mavericks, Maverick Hunters Mega Man X and Zero are sent to contain the situation. Choose either Mega Man X or Zero as you run, jump, dash, scale walls, avoid obstacles, and fight enemies in eight challenging stages. At the end of each stage, defeat the boss to gain a special weapon that will aid you in the upcoming battles.