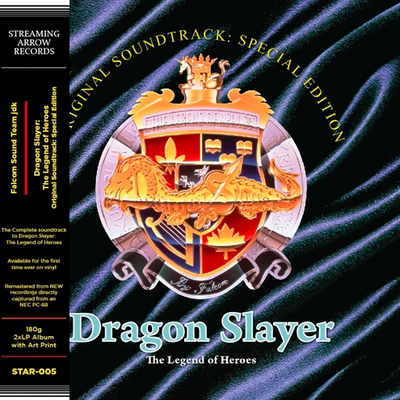 Record label Streaming Arrow has restocked the Dragon Slayer: The Legend of Heroes soundtrack. Composed by Mieko Ishikawa and Masaaki Kawai of the Falcom Sound Team, the album ships on vinyl and compact disc.

Nihon Falcom published the first entry in the Legend of Heroes in 1989. The turn-based role-playing game debuted on the NEC PC-8801 and was later ported to the Super Famicom and Mega Drive consoles in Japan. The first English-language localization appeared in 1992 on the TurboGrafx-CD system.

Preorders are also open through distributors Black Screen Records of Cologne, and PixelCrib in Melbourne. The 36-track digital soundtrack is streaming on Apple Music and Amazon Music Unlimited.

The soundtrack to Dragon Slayer: The Legend of Heroes as a whole is more relaxed and light-hearted in contrast to its other role-playing game contemporaries that Nihon Falcom released on the PC-88. From the relaxing themes of "Town" that instill a sense of peace and safety and the music of "Ship" accompanying you as you sail across the sea.

Our restock sale is now live! Act fast, the quantities of some variants are quite limited. https://t.co/NrQBDytpE7 pic.twitter.com/yyyOUwytTZ