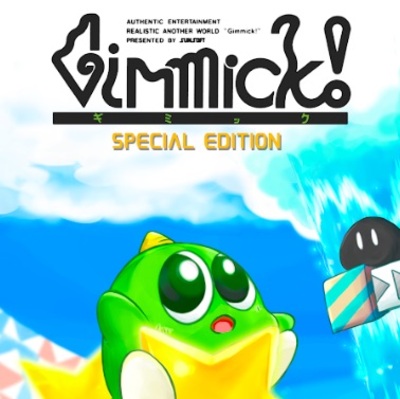 "Mr. Gimmick" made its debut for the Nintendo Famicom in Japan on January 31st, 1992. Directed by Tomomi Sakai, Gimmick! pushed the limits of the 8-bit console, appearing at the tail-end of the Famicon era. Retrospectively, the game has received praise for its challenging gameplay and colorful visual design.

The upcoming Gimmick! port will include extra features, such as achievements, a Time Attack mode, and a Gallery mode. The 2D platformer will also include Save, Load, and Rewind functionality. Wishlisting is currently available on Steam.

Music from the Sunsoft platformer is composed by Masashi Kageyama. Four tracks from the music score can be previewed on iam8bit's SoundCloud channel.

SUNSOFT's cult classic Gimmick! returns in this once-in-a-lifetime Special Edition, developed by City Connection! You can expect stellar action platforming enriched with achievements, a time attack mode, save and quick load, rewind and fast forward functions, a beautiful gallery (with cartridges and scanned manuals), and more!

Explore the magical land of Gimmick! As the cuddly youkai Yumetaro, you must use your star-summoning powers to tackle complex challenges with finesse and creativity. Your wonderful star will help you reach hidden areas, carry you over cliffs, befriend enemies and pull off trick shots that even the toughest baddies won't see coming!

Wow! We're overwhelmed by all the love this fantastic community gave us yesterday when we announced the #Toaplan games and Gimmick! Special Edition⭐️🚀💜

Thank you so much! Today we're going to try and answer as many questions as possible! #MrGimmick pic.twitter.com/1F4RQNS47v