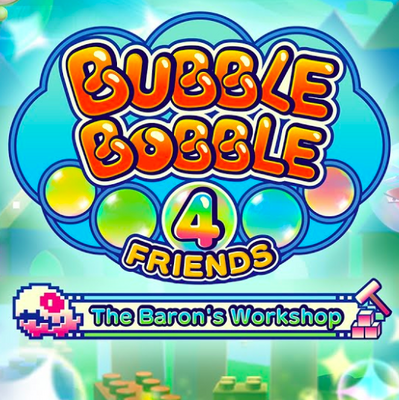 Zuntata's 11-track soundtrack to the original arcade release of Bubble Bobble is also on Spotify and Apple Music. Expanded PC port Bubble Bobble 4 Friends: The Baron’s Workshop is due out on September 30th through Steam.

The Steam release of Bubble Bobble 4 Friends: The Baron’s Workshop will feature all the original and downloadable content from the PlayStation 4 and Nintendo Switch releases, plus a new PC-exclusive Baron’s Workshop mode where players can create new stages using dozens of block types, enemies, and gimmicks unlocked as they play through the game. Players can share their own stages and download endless original creations from around the world on Steam Workshop.

First launched in 1986, Bubble Bobble is an iconic arcade classic in which twins Bub and Bob clear stages of bullies by blowing and bursting bubbles. Bubble Bobble 4 Friends is the latest edition in the classic Bubble Bobble series and the first new sequel in 24 years. Join Bub and Bob as they journey with their friends Peb and Pab on a quest to defeat their old enemies Bonner and Baron Von Blubba in 200 stages of platform puzzle action.