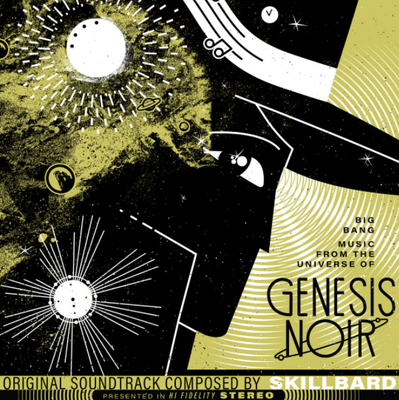 Preorders have opened at iam8bit for the "Big Bang: Music from the Universe of Genesis Noir" double vinyl soundtrack, composed by Skillbard.

Gameplay for the indie noir adventure game focuses on tactile puzzles and exploration, designed by Evan Anthony and Jeremy Abel. Shipping for the two-disc analog record set is scheduled for the first quarter of 2023, and includes the digital soundtrack. Album art is by Evan Anthony.

Compositions and vocal tracks from the album emerged from and expand upon the Genesis Noir game score, composed by Tom Carrell and Vincent Oliver. The digital album "Big Bang: Music from the Universe of Genesis Noir" is available for purchase separately through Bandcamp and Steam.

The 28-track digital soundtrack is bundled with the Genesis Noir Cosmic Collection for Windows and Mac, available through Steam and GOG.

Genesis Noir is a real gem — a fantastical riff that not only spans time and space, but also dabbles in fun little diddies like an celestial existential crisis and the notion of obliterating creation itself. It does so with tremendous style, drenched in monochromatic beauty and amazing animation, oozing with the essence of a smoky jazz club from another dimension.

Did we just describe the game… or the album, because all those things are effectively captured in the soundtrack, too. Composer Skillbard does a phenomenal job of taking us on this massive mind trip, full of lively sax, energetic vocals, periodically somber notes and savvy future melodies. It’s absolutely fantastic and totally unique.

Explore the galaxy in style with Big Bang: Music from the Universe of @GenesisNoirGame 2xLP!

Composer @skillbard captures the essence of a smoky jazz club from another dimension with this mind trip of a soundtrack.

Preorders open for In the Wake of Doshin the Giant vinyl