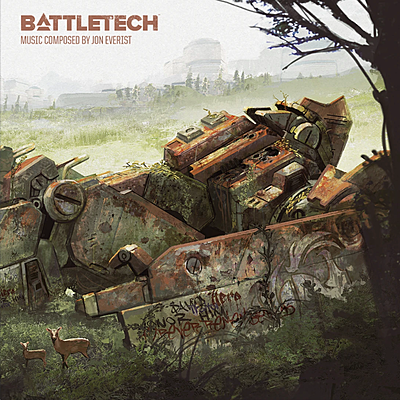 Based on the Classic BattleTech board game, the science fiction strategy title is set in the year 3025 during ‘The Succession Wars.’ The player controls an honor guard serving the royal House Arano led by Kamea Arano. When a bloody coup d’etat is launched by the Aurigan Directorate dictatorship, the protagonist remains the sole survivor of Arano's failed coronation.

Recorded in Hungary, Germany, Seattle and Latvia, Everist’s compositions for BattleTech utilize his signature synthetic instruments, complemented by acoustic recordings performed by the Budapest Symphonic Scoring Orchestra and Brandenberg State Orchestra, remastered by Christian Bethge at RAMA Tonstudio. The digital soundtrack can be purchased through Bandcamp, and is streaming on Apple Music and Spotify.

Published by Paradox Interactive, BattleTech Digital Deluxe Edition is available through Steam and GOG for Windows, Mac and Linux operating systems, bundled with the digital soundtrack. A seven-part "Behind the Music" video playlist can be viewed on YouTube.

The year is 3025 and the galaxy is trapped in a cycle of perpetual war, fought by noble houses with enormous, mechanized combat vehicles called BattleMechs. Take command of your own mercenary outfit of 'Mechs and the MechWarriors that pilot them, struggling to stay afloat as you find yourself drawn into a brutal interstellar civil war. Upgrade your starfaring base of operations, negotiate mercenary contracts with feudal lords, repair and maintain your stable of aging BattleMechs, and execute devastating combat tactics to defeat your enemies on the battlefield.