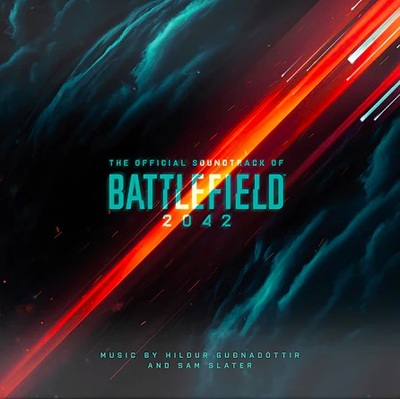 Developed by DICE in Sweden, Battlefield 2042 is the twelfth installment in the FPS series published by Electronic Arts. The multiplayer-focused title, supporting cross-platform play, depicts a near-future apocalyptic climate crisis.

"Nonlinearity seems like a great way to work with sound and music in a more open way," says Guðnadóttir on the challenges of the duo's first foray into game score composition. "[Y]ou have more possibilities for things to change and develop as you work. Creating music for a project that’s interactive is just a different way of writing and that was interesting for us as composers." The full interview can be read on EA's Battlefield web portal.

Battlefield 2042 is currently available for PS4 and PlayStation 5, Xbox One and Series X|S, along with Windows through Steam and the Epic Games Store. The 14-track digital soundtrack is streaming on YouTube Music and Amazon Music Unlimited. "Orbital," "The Observation Of Beautiful Forms," "Battlefield 2042," "Dry Ice," and "Unwave" themes can be previewed on SoundCloud.

Battlefield 2042 is a first-person shooter that marks the return to the iconic all-out warfare of the franchise. Adapt and overcome in a near-future world transformed by disorder. Squad up and bring a cutting-edge arsenal into dynamically-changing battlegrounds supporting 128 players, unprecedented scale, and epic destruction.

EA - BATTLEFIELD BRIEFING: THE SOUNDTRACK OF 2042

Suikoden I & II HD Remaster announced for release in 2023