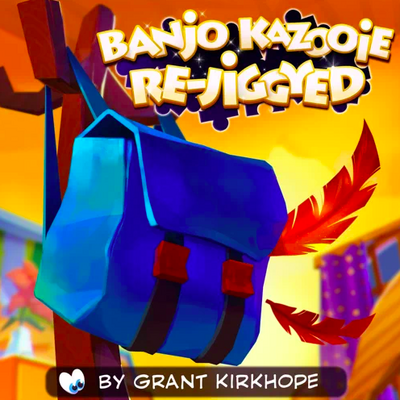 Respawned Records has pressed "Banjo Kazooie: Re-Jiggyed" as an analog record. The vinyl release ships from the publisher.

Composer Grant Kirkhope published the ten-track self-arrangement album last October, available for streaming on Spotify, Apple Music and other online services. An additional arrangement is available through Bandcamp, excluded due to licensing issues.

Rare's 1998 single-player 3D platformer for the Nintendo 64 console stars bear Banjo and supporting character Kazooie, a bird whose wings emerge from the player character's backpack to help him ascend to out-of-reach platforms. The duo are tasked with gathering musical notes and jigsaw pieces to progress through nine explorable areas.

Nintendo of America added Banjo-Kazooie to the Nintendo Switch Online's Nintendo 64 game library back in January 20th. Banjo-Kazooie also is included in the Rare Replay game compilation for the Xbox One console.

Introducing Grant Kirkhope's own remixed album Banjo Kazooie Re-Jiggyed. This Re-Jiggyed adventure is as true to the classic soundtrack as humanly possible coming straight from the creative mind of Grant Kirkhope. Take a trip up Mumbo's Mountain or even dare to jump in the waters of Treasure Trove Cove in this wonderful masterpiece which has been mastered to take all turntables to a new level.

Shipping begins in July!
Signed and personalized copies will take longer so please be patient with us :)
If you haven’t already submitted your personalized message request (only those who paid for it) the deadline is July 1st. The default will be Grants choice! @grantkirkhope pic.twitter.com/S3vRnFkAux