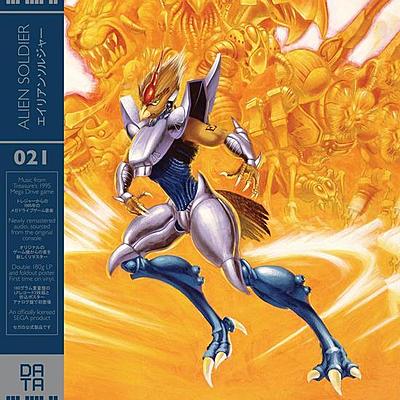 Designed by Hideyuki Suganami at Treasure, the side-scrolling run and gun title was published by Sega for the Sega Mega Drive home console in 1995. Excerpts of two tracks from the remastered soundtrack release, composed by Norio “NON” Hanzawa of Gunstar Heroes, can be previewed on the publisher's SoundCloud channel.

Alien Soldier is available for Windows, Mac and Linux through Steam. The vinyl soundtrack ships from the publisher, as well as distributors Black Screen Records in Cologne and PixelCrib in Melbourne.

In 1995, at the tail end of the Mega Drive’s lifespan, composer Norio “NON” Hanzawa (Gunstar Heroes) was tasked by acclaimed developer Treasure to score their hugely ambitious new shooter, Alien Soldier. He then duly created one of the most technically impressive, challenging and experimental game scores of the entire 16-bit era. In line with Alien Soldier’s frantic gameplay, Hanzawa’s score is often intense, perplexing and occasionally overwhelming, but it is also punctuated with some surprisingly minimal and inventive synth passages, which at times feel oddly reminiscent of Vangelis’s Blade Runner.