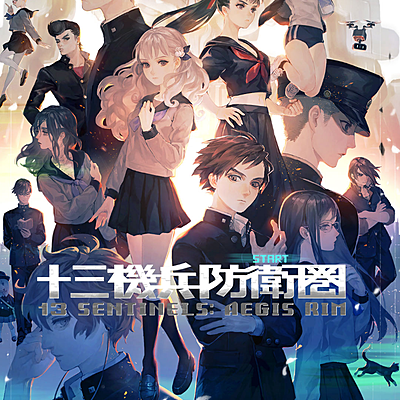 The 4-disc 13 Sentinels: Aegis Rim soundtrack album, featuring music from the strategy RPG, is available for shipping from CDJapan. Excerpts of all tracks are streaming on Ototoy.

Developed by Vanillaware and published by Atlus, music for the game is composed by Basiscape's Hitoshi Sakimoto, Yukinori Kikuchi, Mitsuhiro Kaneda, Yoshimi Kudo and Rikako Watanabe.

"Stellar Memories" from "Remix & Arrange Album: The Branched," featuring cover art by game director George Kamitani, can be previewed on YouTube. 13 Sentinels: Aegis Rim is available for PlayStation 4, and due out on Nintendo Switch on April 12, 2022.

Uncover the truth and delve into a 2D sidescrolling adventure featuring gorgeous art and environments. Then, battle the kaiju in fast-paced, top-down combat. Customize the Sentinels with an arsenal of mechsuit weaponry, and fight to defend humanity...