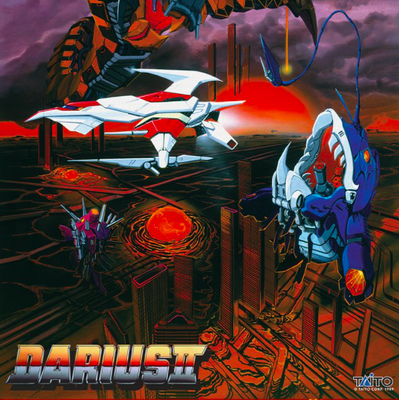 Zuntata Records' soundtracks for both the arcade and Mega Drive iterations of the classic shoot-em-up can be accessed on various streaming services. The 36-minute albums, composed by Hisayoshi Ogura of Zuntata, are available through Spotify and Apple Music. Excerpts are streaming on YouTube, courtesy of the publisher.

Preorders for the vinyl soundtrack are available through distributors Light in the Attic in Seattle and Black Screen Records in Germany. Darius II is included in the arcade and console editions of Darius Cozmic Collection for PlayStation 4, Nintendo Switch, and Windows via Steam.

Darius is one of the pioneers of horizontal Shoot ’em up games and was developed by the legendary TAITO Cooperation and first released for arcade machines in 1986. In Darius, the player slips into the role of a spaceship pilot, either alone or in two-player mode, who must shoot and fight his way through enemy hordes with the ship Silver Hawk. Numerous sequels and portings followed over the years and from the outstanding soundtrack to the unforgettable opponent design and the branching paths at the end of each section, the games set new standards...