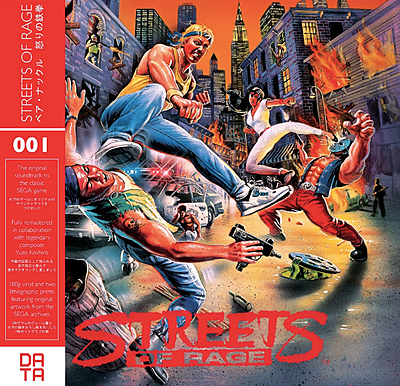 The Streets of Rage remastered soundtrack album, published by Data Discs in the United Kingdom, is back in stock in translucent red vinyl.

Audio from the classic Sega brawler by series composer Yuzo Koshiro is sourced from the original NEC PC-88 files, recorded and supplied in 32bit/96kHz by the composer, in combination with a 32bit/96kHz direct capture from a PAL Mega Drive (HD, VA4, non-TMSS) Yamaha YM2612 sound chip, running at 60Hz through a stereo output mod.

The digital edition of the remastered soundtrack is available for purchase through Bandcamp, while the PC-8801 edition of the soundtrack, entitled "Yuzo Koshiro Best Selection Vol.6," is streaming on Apple Music.

Streets of Rage is available for Windows, Mac and Linux through Steam. The vinyl soundtrack ships from the publisher in Europe, as well as through distributors Light in the Attic in Seattle, Mondo of Austin and PixelCrib in Australia.

Pressed on 180g translucent red vinyl and packaged in artwork sourced from the SEGA archives. All copies include a traditional OBI strip and 2 x lithographic prints featuring cover illustrations from the Japanese and US/EU editions of the game. Audio sourced from the original NEC PC-88 files, recorded and supplied by Yuzo Koshiro, in combination with a 32bit/96kHz capture from a Mega Drive console.

Light in the Attic - Streets of Rage Translucent Red Vinyl