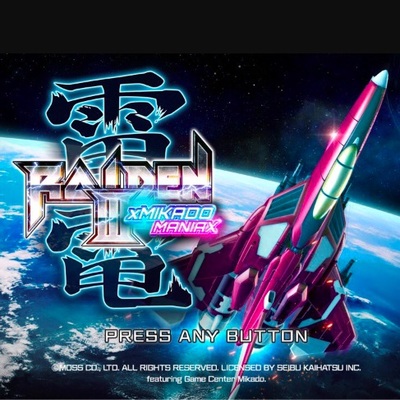 NIS America will publish Raiden III x Mikado Maniax by developer Moss this summer. The shoot-em-up will arrive in Japan on February 23rd, available for Xbox One and Series X|S, PlayStation 5 and Nintendo Switch.

Raiden III Digital Edition launched for Windows through Steam in 2014. The "Mikado Maniax" enhanced edition of the vertical scrolling shoot-em-up will include a Gameplay Mode port of the arcade game, Score Attack Mode to compete for high scores on each stage, and Boss Rush Mode centering on all the toughest enemy encounters in the game. Both a gameplay trailer and soundtrack crossfade preview can be viewed on YouTube.

Raiden III x Mikado Maniax is the successor to Raiden IV x Mikado Remix, scheduled for launch for Windows via Steam in early 2023. Music for the game is by Go Sato with additional music is by the Go Sato Band, Heavy Metal Raiden, and O.T.K.

As the extraterrestrial race known as the Crystals launches another attack on Earth, it’s up to you to end their assault! Raiden III x MIKADO MANIAX is an electrifying entry in the series, and marks the debut of Raiden III on modern consoles including Nintendo Switch, PS4, PS5, Xbox One, Xbox Series X|S, and PC. While staying true to its classic origins, a suite of exciting content allows this title to truly take flight!

Relive the original arcade experience with vertical screen play while deploying several unique wallpapers for the edges of the screen. Add a jolt to the traditional Raiden formula by choosing from gameplay modes such as Score Attack and Boss Rush, along with Double Play, the ability to pilot two ships at once. Reach new heights by competing against players online in the world rankings, and elevate your experience by choosing between original or remixed background music, as well as individual tracks for each stage.

Returnal for Windows slated for release on February 15th