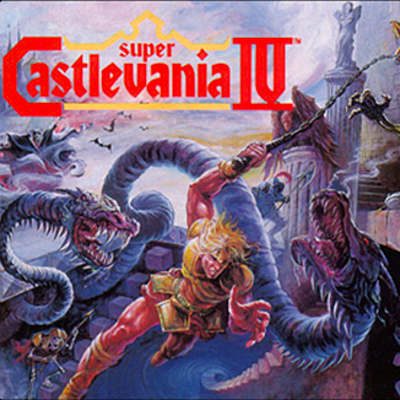 Austin-based publisher Mondo has pressed the Super Castlevania IV soundtrack to vinyl. The analog record release is available for shipping from PixelCrib in Melbourne, Australia.

Developed for the Super Nintendo Entertainment System console in 1991, the game depicts the return of vampire killer Simon Belmont as he once again sets foot on the castle grounds of Dracula's haunted domicile. Castlevania IV showcases the Super Nintendo console's Mode 7 graphics, utilized in a scene where Simon dangles from his whip as the entire castle rotates in space.

Music for the game is by Masanori Adachi and Taro Kudo of the Konami Kukeiha Club sound design team. Paying homage to previous installments in the series, the soundtrack includes an arrangement of "Vampire Killer" from the score for Castlevania by Kinuyo Yamashita (NES) and Satoe Terashima (MSX). "Bloody Tears" from Castlevania II and "Beginning" from Castlevania III also make an appearance.