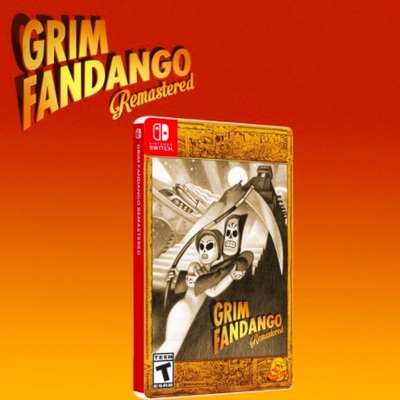 Publisher iam8bit has opened preorders for the physical edition of Grim Fandango Remastered for Nintendo Switch and PlayStation 4 consoles.

Developer Double Fine's high-definition return of the 1998 adventure game by LucasArts features a music score by Psychonauts series composer Peter McConnell, recorded with the Melbourne Symphony Orchestra. The physical edition sports a reversible cover illustrated by by Holly Rothrock and sleeve cover design by Peter Chan. Over two hours of exclusive developer commentary are included in the game, along with a browser of digital concept art.

Grim Fandango Remastered is available for Windows, Mac and Linux through Steam and GOG, alongside PlayStation 4, Xbox One, and Nintendo Switch consoles.

Something's rotten in the land of the dead, and you're being played for a sucker. Meet Manny Calavera, travel agent at the Department of Death. He sells luxury packages to souls on their four-year journey to eternal rest. But there's trouble in paradise. Help Manny untangle himself from a conspiracy that threatens his very salvation.

The land of the dead isn't the end of the road.

Wave 2 of our physical edition of Grim Fandango for Nintendo Switch is now in production, shipping this summer!