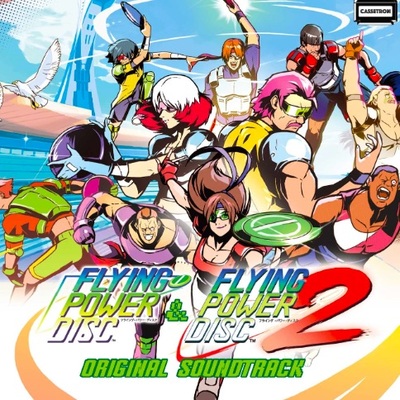 Fangamer previously published the Windjammers Vinyl Soundtrack back in October of 2018, featuring music by Data East's band Gamadelic from the NEOGEO CD release, and cover art for the analog record is by Paul Robertson. Windjammers is currently available for Nintendo Switch, PS4 and PlayStation Vita.

Disc One of the Cassetron collection includes music from both the arcade and Neo-Geo CD editions of the game, along with two bonus tracks. Disc Two contains music from Dotemu's sequel, released earlier this year for PlayStation 4, Xbox One, Nintendo Switch, Windows through Steam, and Google Stadia.

25 years later, throwing flying discs at your opponents is still as cool as back in the days. Sequel to the NEOGEO cult classic Windjammers, Windjammers 2 is the perfect mix between what you loved about the classic title and brand-new mechanics. Fast-paced, strategic, easy to learn but hard to master: Windjammers 2 follows the steps of the first episode and brings back what makes the Windjammers series an amazing fun and competitive game!

DISC 1 contains the original arcade version from 1994 and the Neo-Geo CD version.
DISC2 contains the latest "WJ2" in 2022‼