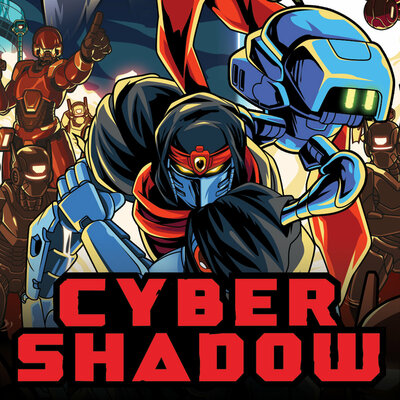 Protagonist Shadow must scour the claustrophobic factories, corrupted research labs, and fortified coastlines of Mekacity in a quest to exact revenge on the foes of his lost ninja clan. He faces off against Dr. Progen’s synthetically-enhanced army in a desperate post-apocalyptic battle, armed only with his Ninjutsu fighting skills and double jump, cross slash, and wall slide traversal techniques.

Shadow's quest unfolds through sprite-based in-game action and animated cinematic cutscenes. Cyber Shadow is currently available for Xbox One, Nintendo Switch, PS4 and PlayStation 5 consoles, along with Windows, Mac and Linux through Steam.

The world has been taken over by the evil Dr. Progen and his merciless synthetic army. A desperate plea for help sets Shadow, the sole survivor of his clan, on one last mission to uncover what started the path to perpetual ruin. Your robotic companion, L-Gion, is your only guide through the ruins of Mekacity. How far will Shadow go to protect his clan and the one he loves? Is there more to their bond than meets the eye? Only you can unlock the secrets to your clan's ancient powers. Hurry before you run out of time! The road to redemption awaits in Cyber Shadow, the quintessential Ninja Action game.

Can you believe it's already been TWO YEARS since Cyber Shadow leaped its way onto gaming platforms? Time sure flies when you are taking down mechanical monstrosities!