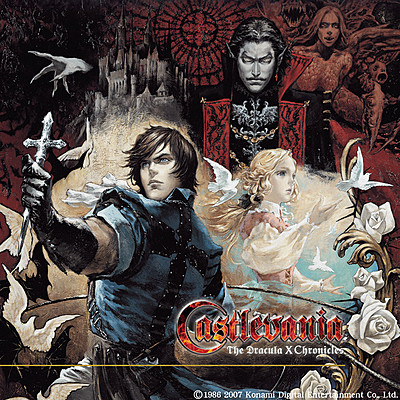 The soundtrack to the polygonal remake of Rondo of Blood for PlayStation Portable is available for streaming through Amazon Music, Spotify and Apple Music. The Castlevania Dracula X Chronicles soundtrack album features 50 music tracks, covering both the PSP remake and the PC Engine CD source material.

The story of Rondo of Blood takes place in the late 18th century and centers on Simon Belmont's descendent Richter, as he storms Dracula's castle to free the captive maiden Maria Renard. As with Castlevania III, Rondo incorporates branching paths to allow for variation on return playthroughs.

Music for the game is by Masanori Akita, with arrangements by Yuichi Tsuchiya, Akihiro Honda and Yasuhiro Ichihashi. Michiru Yamane contributes new arrangements of "Mournful Serenade" and vocal track "Nocturne" from Symphony of the Night.

Experience two of the greatest games from the famous Castlevania series. Make your way to the top of Dracula's castle as Richter Belmont, descendant of the famed clan of vampire hunters, in 'Rondo of Blood', or take the leading role as Dracula's son Alucard in 'Symphony of the Night'.