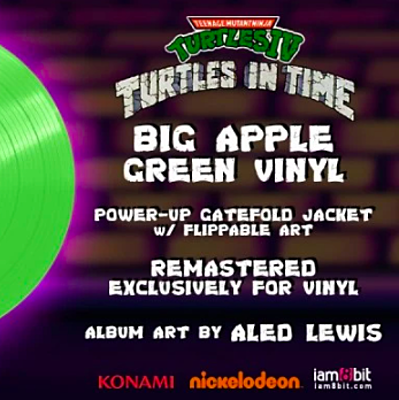 Developed by Konami, Turtles in Time debuted for the arcades in 1991 and was later ported to the Super Nintendo home console. Music for the game is composed by Mutsuhiko Izumi and Kozo Nakamura.

The analog record is available for shipping from PixelCrib in Melbourne, iam8bit Asia and iam8bit Japan. The game's opening stage theme, "Big Apple 3 AM," can be previewed on PixelCrib's SoundCloud channel.

Enter the mean, green, fighting machines, on a hard rock collision course to reset the space-time continuum back to a peaceful, cheesy-grease-soaked state. This is one of the greatest SNES soundtracks of all time, expertly mastered for the first time ever on vinyl, cozied away in a choose-your-own-adventure pizza (or bomb) box.