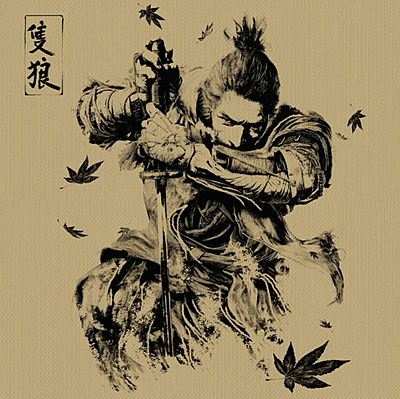 From Software's SEKIRO: Shadows Die Twice, set in 16th century Sengoku period Japan, tells the story of the Wolf, a skilled shinobi tasked with protecting a child known as Kuro, the "Divine Heir." Sought after by his enemies, the "Dragon Heritage" of Kuro's blood is rumored to convey immortality to those who can possess it.

In his service as bodyguard to his young master, the Wolf's left arm is severed in battle. He is dragged unconscious to a dilapidated Buddhist temple, described as "a place for those with nowhere left to go." There, a sculptor of Buddha statues holed up in the derelict building replaces the severed arm with a prosthetic. This "fang" of the one-armed wolf, the sculptor explains, mirrors the "deep karmic debt" that compels him to spend his days carving statues alone in solitude.

In this discussion we hear from composer Noriyuki Asakura on his score for SEKIRO's cinematic cutscenes, with an emphasis on the collaborative aspect of the recording sessions.

The one-armed wolf earns his moniker when he loses his left hand in battle. He is taken in by an elderly sculptor who formerly served as a shinobi and now spends his waking hours carving Buddha statues. Using his craft, he fashions for the wolf a prosthetic arm made out of wood and metal. Seeing as Buddhist ascetic practices are a unique aspect of Sekiro’s setting, how would you describe your understanding of the atmosphere of Tantic Buddhist chants from a musical perspective?

On "Sculptor Of The Dilapidated Temple," you can hear Robin Dupuy's signature performance on the cello. He is French, and we have known each other these past fifteen years in Tokyo. He described himself as a gypsy for having traveled the globe and experienced many different locales. He had lived in India five years prior. He said, "Mr. Asakura, in India they employ twelve different music scales, limitless scales." And I found it overwhelming for a minute while I pondered that. He, together with Gen Ittetsu Strings and Kiyotsugu Amano back up some of the top singers in Japan.

Contrabass is featured on "Conspiracy." At first I experimented with some cutting-edge software for this piece, but as it turned out the virtual sound could not match the feeling of the live instrument.

For the ensemble on "Conspiracy," the needed tension was provided by Robin Dupuy on cello and Gen Ittetsu on violin. I loaded my 25-year old Kurzweil K2VX CD-ROM and introduced Tantric Buddhist chanting vocal samples to further the impact of the dread.

Your work history with 天野清継. (Kiyotsugu Amano) dates back to Ruroni Kenshin (るろうに剣心 -明治剣客浪漫譚- 維新激闘編 ) and continued with the soundtrack to Tenchu (天誅サウンドトラック). How would you describe your collaboration with the guitarist in the context of scoring historical dramas?

The setting of Sengoku era, Japan sets SEKIRO apart from prior FromSoftware franchises. Seeing as the shamisen is an instrument that is so commonly associated with traditional Japanese music, I wanted to ask if you could share your views on the unique strengths of this musical instrument.

Noriyuki Asakura: You know, there is something to be said about the impressive quality of the timbre of the shamisen. It has a strong presence that refuses to blend into the background, in the best sense of those words. The shamisen does not rely on chords like other musical instruments, making it stand apart from backup instruments. This would explain why the shamisen generally stands out instead of blending in.

Previously, on Tenchu 4, your studio collaborated with third-generation Tsugaru-Shamisen master Yutaka Oyama. Can you tell us how you first came in contact, and how you sought to collaborate on these game scores?

There are four varieties of shamisen, but the one that I prefer because it suits my music the most is the Tsugaru-Shamisen. The sound of the instrument is resonant, and it can play beats with an aggressive attack. Oyama-kai is known as the foremost practitioners of the instrument. Yutaka Oyama is a third-generation shamisen master of the Oyama-kai. But, to be honest, I cannot quite recall our first encounter.

Looking back, what comes to mind is the time I saw him perform the electronic shamisen on stage with a rock band, fifteen years ago. I'm thinking that live performance must have been where it began? Most Japanese pop artists, and even students of traditional court music, are brought up listening to Western music. However, taking a serious pass at performing live with a rock band is not so common. Witnessing such passion piqued my interest.

In the discipline of traditional court music, there is an important concept known as "ma" (an interval of silence) that is, in a way, unique to Japanese aesthetics. There are many cases where a practitioner of traditional music will have their sense of pitch and rhythm negatively impacted by its influence.

Musicians who can get in touch with the rhythm of Western music, and understand how vertical placement in musical notation relates to pitch, can much more readily perform with an ensemble. Among classically trained musicians, I've encountered few who can pull it off. And I record with such a performer. Of course, Oyama is such an individual.

In recording sessions, in reaching a climactic passage or when an infusion of passion is required, I will take the additional step of overdubbing his performance several times. Basically we are introducing, in addition to the ensemble, four to six layers in unison. It allows us to capture stronger beats and accents, in a way that cannot be matched simply by calling in four to six additional players. Four layers of his particular expression are decidedly better in complementing the group's performance.

By the way, did you know that the surface of the shamisen is commonly made of cat skin? That's something unique about the instrument that maybe you haven't heard before.

Vocal samples are a noticeable component of several pieces of your cinematic score. Can you offer us some insight on how you went about recording these voice samples?

On "Apparitions," you can hear the audible voice of a young person. Initially, From Software prepared a sample for us to use by recording a voice actor, but the pitch of the voice recording was all wrong. I went ahead and recorded my daughter for that track. The voice sample can be heard only very briefly, so nobody seemed to mind.

On "Great Shinobi," the musical performance by the Gen Ittetsu Strings Section was terrific, expressing the combined sensation of fear and speed, exactly as intended.

Gen Ittetsu Strings' performance can also be heard on "Dialogue - Pot Noble," in an ensemble with brass instruments.

Excerpts from the "Great Shinobi" recording session and an unreleased track can be viewed on the composer's Facebook page.

SEKIRO: SHADOWS DIE TWICE vinyl soundtrack by Laced Records is available for shipping in Europe through HighScore Records. The 3-CD physical release can be purchased through CDJapan. Images courtesy of Laced Records and FromSoftware.